MERCEDES IN THE WINDS

The Mercedes star & the power of the wind

This new film sets the stage for the switch to 100-percent-green electricity sourcing for production at Mercedes-Benz AG’s.

A new global campaign from Mercedes-Benz celebrates harnessing the power of the wind, something that the brand, in designing cars, has traditionally fought.

The spot, by Publicis NL & BE, pushes the brand’s sustainability message, as it announces that it will use electricity drawn entirely from renewable energy sources in its factories from 2022.

Directed by Nicolai Fuglsig of MJZ, the film is set to a haunting minor-key cover version of Beatles track “Come Together,” sung by Lauren O’Connell. It starts off with a hint of a storm coming, as wind rustles through dead leaves in an urban landscape, grasses, laundry on a line and wind chimes. As the wind intensifies and we see subtle glimpses of a car, a child watches from a window and eventually, a giant wind turbine emerges, and through light and smoke, it transforms into the Mercedes-Benz Logo. “After years of fighting the wind, we’re joining forces,” the VO says.

“Over the years car manufacturers have always struggled with the wind, trying to make their cars more aerodynamic; this piece is about wind becoming a partner,” says Damir Maric, head of global campaigns & product content at Mercedes-Benz. “We looked at how we could tell an interesting story and also make it visually appealing.” 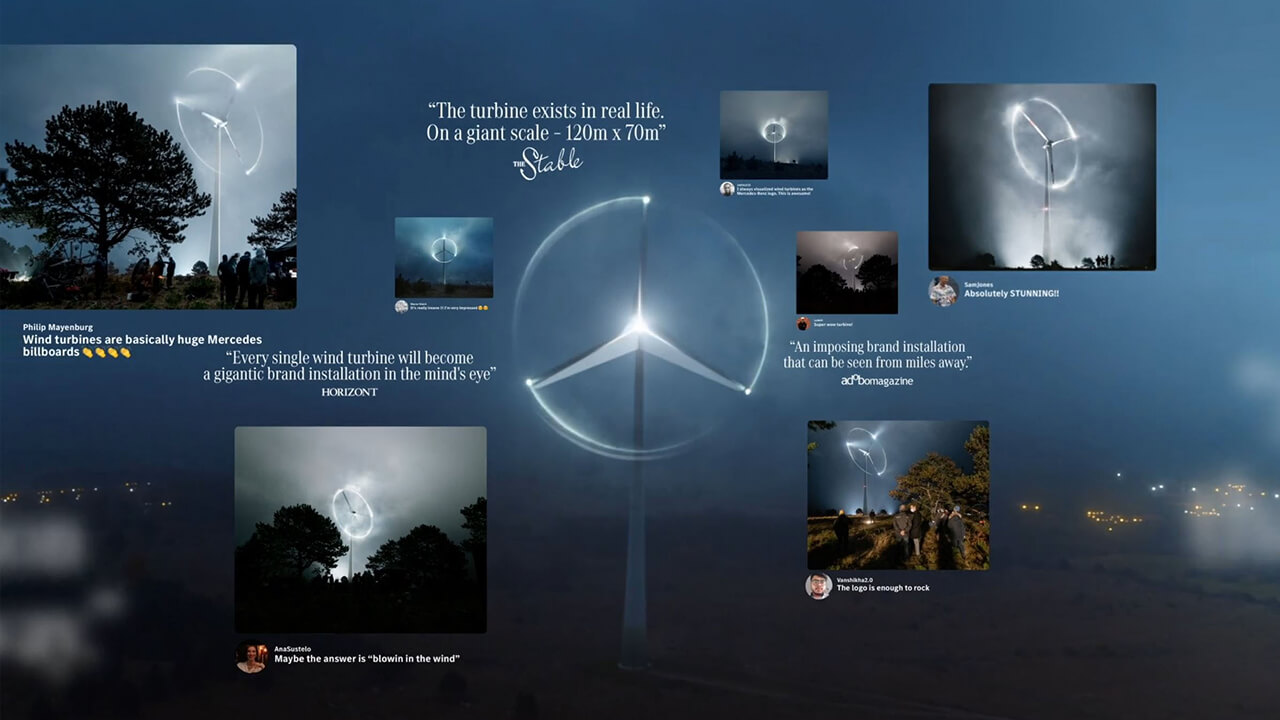 The spot was shot in Slovenia and involved a 120 x 70 meter installation for the turbine. As well as touting the brand’s environmental credentials, the campaign comes as Mercedes is attempting to be more “playful  and entertaining” in its advertising and connect with its audience in different ways, says Maric. “Not that long ago we had this rule to never play with the logo,” he adds. “But in contemporary culture it is a valuable asset if you can maybe not take yourself too seriously. A 135-year-old brand could be seen as having a cloud of arrogance over it, but that’s something we really want to change in terms of our perception.